The 17th ICCAS (International Conference on Control, Automation and Systems) conference was held from the 18th to the 21st of October in Jeju, South Korea. UNEXMIN was presented during the first day on a plenary session related to “Mechatronic and Automation”. The ICCAS conference is internationally known as a place for applied science researchers, with mainly focus on mechatronics, robotics and automation. As of this, Soheil Zavari, researcher from TUT, working on the development of UX-1, presented the project in this forum.

Some Asian countries, like South Korea, have been investing a lot of time and money in robotic applications such as ROV, UAV and industrial robots. They’ve also developed a lot of theoretical research in this field. Introducing the new UNEXMIN concept of “exploring flooded mines using an autonomous system” to a robotics-focused community was then quite impactful. This translated into a lot of interest in the project as Soheil suggests: “Although there was little time (about 20min) for presenting the mechanical and mechatronic development of the UX-1 system, most of the researchers have been quite interested to see the real robot face-to-face”- this will actually happen in mid-2018 with the first field trial in the Kaatiala mine, in Finland. 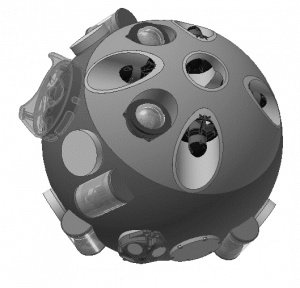 General layout of the UX-1 robot

The UNEXMIN presentation, although being directed to the robotics audience, focussing on the maneuverability of the robot – propulsion, pendulum and ballast systems -, also touched other important points. Among these, there were references to the different works being developed by the different teams, such as scientific instrumentation, post-processing tools, among others. Another important point, was the introduction of the UX-1 main purpose of collecting geological data and the narrow launching and driving space that the autonomous system will face inside flooded mines.

All-in-all this was a very good opportunity to make the project known to the robotics community, as robotics are such an important part of UNEXMIN!