“I feel it would be easier to perform the same task on the surface of the Moon or a planet like Mars.”

The UNEXMIN project began last February, six months ago. It is an EU-funded project from the Horizon 2020 research and innovation programme. Norbert Zajzon, the UNEXMIN project coordinator, talks about the past, present and future for UNEXMIN.

Luís Lopes, LPRC: First things first – what is UNEXMIN?
Norbert Zajzon: UNEXMIN is the abbreviation of the ‘Underwater Explorer for Flooded Mines’ H2020 project, based on the topic ‘New sustainable exploration technologies and geomodels‘.

LL: Where does the idea for UNEXMIN come from? It seems to be a crazy one…
NZ: It is a quite an ambitious idea! Basically to support the raw materials’ needs of the EU, to gather valuable information from flooded mines without risking human lives, but it also can be used in different fields like archaeology, rescue or water pipe-line monitoring and so on. If I am correct, the first basic idea did come from Balázs Bodó (LPRC) a few years ago, which was further evolved and matured for the final submission of the project. In the beginning the idea seemed to be taken from a sci-fi movie!

LL: The main point of this project is to develop a multi-robotic system that can autonomously map flooded mines. How difficult it is to achieve this?
NZ: It is a very difficult task. Developing a non-contact robot, which is fully autonomous, in a very complex setting with lots of obstacles and mapping the environment and simultaneously gathering geochemical and mineralogical information underwater is very hard. I feel it would be easier to perform the same task on the surface of the Moon or a planet like Mars.

LL: How important is it to map the flooded mines in Europe?
NZ: In Europe there are about 30,000 closed mine sites, many of which are now flooded. It is important to map and know what is in our abandoned mines under the surface, mainly from the raw materials’ point of view, but also to document and safeguard cultural heritage or as a hazard study for buildings on the surface in the case of mine collapse.

LL: UNEXMIN has a total of 13 partners within its consortium. What areas of expertise are present in this project?
NZ: This is a truly multidisciplinary consortium with experts in geology-geochemistry, mineral exploration, oceanic research, mine engineering, mechanical engineering, automation, robotic development, autonomous system control, 3D geological software development and visualisation, experts in dissemination and networking, experts in founding and running enterprises. And even with this extensive list I feel I might have missed some important areas present in our consortium…

LL: What are the big challenges that the UNEXMIN consortium is facing/is going to face during the robotic platform development?
NZ: The three main challenges I personally feel are:

1) Energy consumption of the robot, as it will have to run on batteries and cannot use any outside energy sources.

2) The small size of the robot, as it will have to fit into medieval mine tunnels, which can be very small, and still carry all the necessary instrumentation.

3) Survive the pressure and the – sometimes – very aggressive mine waters and still perform the geological and mineralogical measurements in that environment. 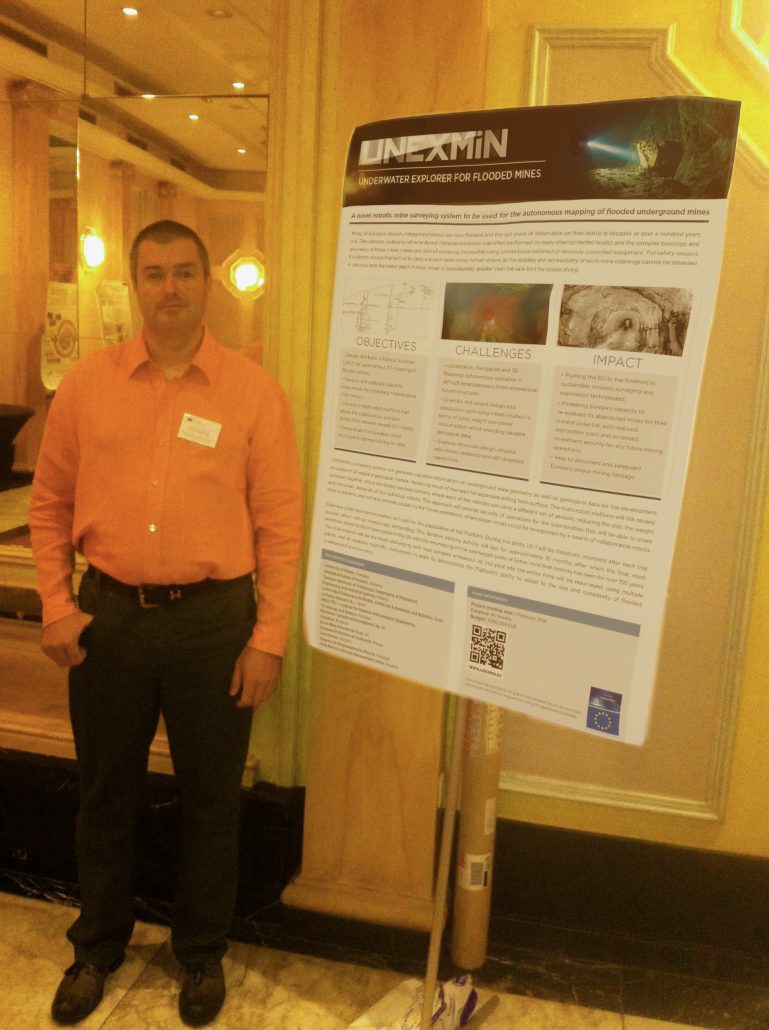 “In the beginning the idea seemed to be taken from a sci-fi movie!

“The first reliable look of UX-1 can be seen on next spring.

LL: What impacts can be expected from UNEXMIN?
NZ: UNEXMIN is a project that could have a lot of impact in the future, mainly at a European level, but also internationally. The three most important impacts I foresee are:

1) Pushing the EU to the forefront in sustainable minerals surveying and exploration technologies.

2) Increasing Europe’s capacity to evaluate its abandoned mines for their mineral potential.

Besides the main scope of the above impacts, UNEXMIN could also lead to the deploy of robotics technologies in new application domains, acquiring valuable geological information and allow technology transfer between robotic solutions and mineral industries, that will lead to further innovation in those areas.

LL: What are the next steps to be taken for the project development?
NZ: The next important steps are to further develop, simulate and test different conceptual models of the robot to be able to carefully choose about the basic robot design, and also specify what kind of scientific instruments can be incorporated and with what kinds of performance constraints.

LL: Who are the interested parties in this project? And who can benefit from the service that is going to be available in the future?
NZ: There are a lot of interested parties, the so called stakeholders, in this project. Overall, I can say that all individuals from the geology, minerals exploration and mining sector, the ICT/robotics community and even the general public interested in the thematics of this project are our main targets. I believe that the technology developed in UNEXMIN will benefit a whole range of future consumers: geology-related companies (mining, geological surveys or geoheritage sites), national authorities, universities and other companies in areas such as environment or industrial diving and even for tourist sites (e.g. caving).

LL: You were present in Brussels in an international event about raw materials (see picture above). How did it go?
NZ: It went very well, actually! Many people were interested about our project not only from Europe, but also from overseas, like Canada or Mexico. And UNEXMIN was invited to participate in further discussions and conferences in similar fields of research in the next year. We are starting to make a name for ourselves…

LL: When should we expect to see the first looks of UX-1?
NZ: The basic concept and the main conceptual sub-system plans should be ready in the beginning of 2017, so the first reliable look of UX-1 can be seen on next spring.

LL: And will it be a good looking robot or just an ugly scrap of metal and other things?
NZ: The most important point of the design is functionality and survivability. As it has to move underwater in an environment with a lot of obstacles like ropes and spikes the basic shape is already decided, which is spherical with as a smooth surface as possible. Of course it has to carry enormous amounts of light sources, lasers, cameras, different sensors and many thrusters on its surface, so the final look will be very interesting. The recent conceptual drawings are very exciting, so I think it will be a good looking robot, moreover when it will run with all the different lights and lasers on for its sensors – the look will be astonishing!

LL: Final question: Is it difficult to be the project coordinator of such a big EU project?
NZ: Yes, it is a difficult and tiring job, but at the same time it is a very good and joyful experience to be in the centre of a very interesting technology development with a great variety of scientist experts in different fields from different parts of Europe, from Finland to Portugal thru Spain, England, Slovenia and Hungary.

Want to join the discussion?
Feel free to contribute!