“Requirements and specifications are the easy part. The hardest is to design a robot complying them all.”

The UNEXMIN project is almost one year old. After a busy first year of work, UNEXMIN is on-schedule to deliver the first mechanical UX-1 prototype. Jussi Aaltonen, from TUT (Tampere University of Technology), leaders of WP1 – Robotic Functions Validations, talks about what has been done over the past year concerning his team’s work in UNEXMIN’s development scene.

Luís Lopes, LPRC: What is WP1 (Robotic Functions Validations) and what has been developed from it?
Jussi Aaltonen: The purpose of WP1 is to develop and validate a robotic platform, i.e. all mechanical and mechatronic structures, systems and components of UX-1 (the name of the robot). Also, low level (directional) control principles are developed and validated in this work package. WP1 has successfully established a robotic platform which fulfils all necessary requirements.

LL: How important is the work developed in WP1 for the future UX-1 robots?
JA: Work in WP1 is fundamental for the successful completion of the project. All later development stages rely on this work.

LL: The systems/subsystems that the robot will employ were defined in this WP. What can you tell about them? How crucial are they for the robot’s overall functionality?
JA: All systems are needed for the robot to achieve full functionality. However, survivability, i.e. the robot’s capability to return from its missions, is more heavily affected by some systems than others. It is, for example, possible to return with a broken multi-spectral camera, but losing a sonar may cause the robot to be lost.

LL: What kinds of tests were developed to test the hardware/software systems? How about the results obtained, were they positive?
JA: Tests are done as so-called hardware-in-the-loop (HWIL) tests in laboratory. In HWIL testing, computer simulations and real hardware components interact, making it possible to do laboratory testing more closely to real operating conditions. Components and systems have also been tested in the pool by using a plastic mock-up of UX-1. Tests have been successful, which, unfortunately, does not always mean positive results. But weaknesses were found and lessons learned.

LL: In what conditions was the prototype tested?
JA: Tests have been done in shallow depths (below 5 m) and moderate temperatures. Pressure testing at 60 bars (equivalent of 600 m depth) will start soon. 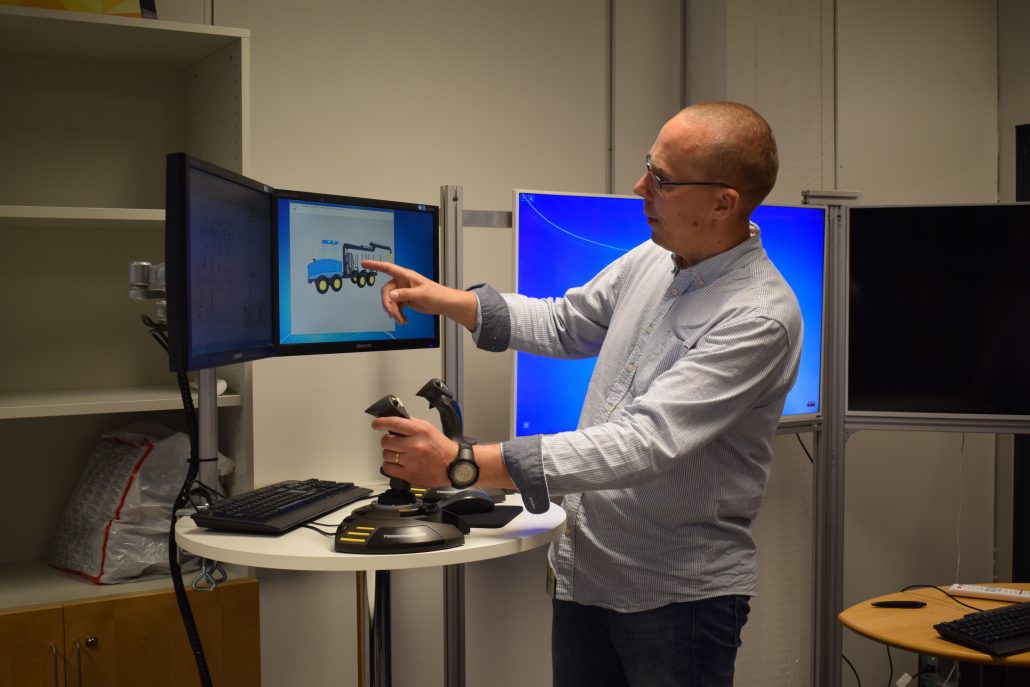 “WP1 is fundamental for the successful completion of the project.

“There will probably be some heated discussions, but that is only a sign of people being passionate about their work.

LL: Being leader of such an important WP of the UNEXMIN project must be challenging. Has it worked out as you imagined? Do you feel that everything has been accomplished?
JA: Over this past year of cooperation, UNEXMIN teams from the various partners have gotten to know each other and each other’s ways of working. The possibilities to meet the others in person and to really collaborate in real life conditions, such as in workshops, have been a great benefit and a very important thing, bonding people from all around Europe together and working towards  a common goal. Of course there are always some challenges. The biggest challenge has been finding a common and efficient enough platform for information exchange.

LL: TUT will organise a UNEXMIN workshop in the beginning of February (2017) in Tampere, Finland. What can be expected to come out of this?
JA: This event will conclude the work of the first year in the UNEXMIN project. Most of the work packages have already started or about to start (exception goes to WP7: Demonstration/Pilots), and thus we will hear a lot about results and developments in this meeting. We will also hear about the plans for a couple of essential work packages starting right after the meeting. I expect that we will have a good and fruitful meeting with the same good spirit and warm atmosphere that we have always had. There will probably be some heated discussions, but that is only a sign of people being passionate about their work.

LL: You are a specialist in the robotics field. What possible impact do you think the UNEXMIN project will have on the robotics field?
JA: UX-1 [UNEXMIN robot design-prototypes] will have a very different structure and layout than what autonomous underwater vehicles usually have. This will most probably have some effects on the field of robotics and will open new doors to further miniaturised underwater robots – the future starts here. Also, the environment where UX-1 will operate is probably the most challenging after Mars and asteroid landers and that will also give tiger leaps in the field of robotics, developing new and better robotic systems.

LL: After one year, how do you feel the UNEXMIN project has progressed?
JA: We are roughly in the place where we should be according to our plans. Work has been harder than what was expected. On the other hand we learned a lot more, while we still have managed to keep in pace.

UNEXMIN Timeline for 2017
Scroll to top